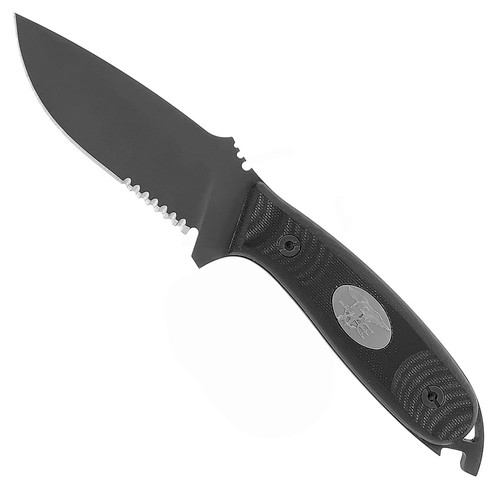 The DPx Heft 4 Navy Seal SpecWar edition was a short run, commemorative knife designed and manufactured for member of the Naval Special Warfare community. Limited to 500 pieces, this knife was produced exclusively for the personnel who advised its final form.

In 2012, a handful of personnel from the Naval Special Warfare Command were asked what they wanted in a knife. They SEALs came up with this knife. A smaller, sterile, all black fixed blade knife that is easily concealable. Made with a highly corrosion resistant matte black PVD coated ELMAX stainless steel drop point blade that has exactly two inches of aggressive serrations along the edge. Black G-10 laminate handle scales with a Navy Seal Trident emblem set into the front scale. Unique wire stripper jimping on the spine in the 3 most popular gauges. Striker pommel with prybar and lanyard hole. Includes a cordura sheath with storage pocket for a sharpener. This is a fantastic highly sought after knife that is almost impossible to find. I have seen them go for $450+. Brand new in box.