Each section of a knife and their specific attributes and features can be difficult to remember. The basic anatomy of a knife can be divided into two parts: the handle and the blade. Let’s go over the main points and features of each:

On the top of the blade is the Spine–the thickest and heaviest edge. It supports the blade and gives it overall strength. In a standard fixed-blade knife, the spine runs the full length of the blade, from the tip to the butt.

The belly or sweep of a knife is the curved arc that extends outward along the blade’s cutting edge. Depending on the style, not all knives will have this feature.

The Primary Bevel or Primary Grind is the first grind applied to the blade’s edge. A Secondary Bevel or Secondary Grind might be added to create another angle on the blade. Knives with two bevels (or grinds) are called “compound” or “double” beveled.

Jimping is a series of notches down the spine of a blade or occasionally around the handle created to provide enhanced grip on a knife.

Some blades might come equipped with Serrations–which are sawtooth style modifications most often placed along the cutting edge toward the handle for greater application of leverage.

A Plunge Line is the junction where the bevel ends and meets the flat space near the handle.

A thumb rise or thumb ramp is a raised incline in the spine of the blade meant to prevent a user’s thumb from slipping while cutting. 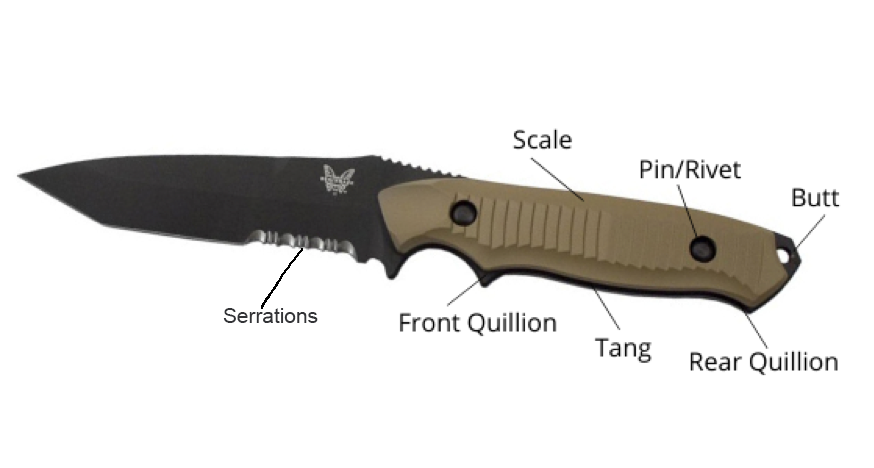 Again depending on the style of the knife, some knife blades have a Tang. This is when a fixed blade knife extends into the handle. A tang can extend a fraction of the length of the handle or all the way to the end–referred to as a full tang. Scales are added to either side of a tang and attached with pins, rivets or screws.A pin, screw, or rivet is the hardware used to hold the blade onto the handle of the knife. Depending on the design, a knife might have one or several of these.

The end of the knife is called the Butt. It might feature a lanyard hole, pommel or a glass breaker, depending on the knife’s intended use or specialty.

Different knives can have a variety of features and functions based on their intended use. These features above are the basics that you will find on most knives–from a kitchen knife to a hunting or survival blade.